If Miami is the Magic City, Craig Robins is its tireless conjurer. As founder and chief executive of the real estate company Dacra, Robins has been pulling off seemingly impossible feats since the late 1980s. He transformed the moribund art deco neighbourhood of South Beach into a glittering destination. More recently he has turned the [...] The Miami Beach villa where legendary gangster Al Capone lived well and died was just purchased by famed European soccer agent Mino Raiola, who made a killing on the transfer of French star Paul Pogba to Premier League’s Manchester United. The Dutch super agent made $32 million on Pogba’s record-breaking $143 million transfer from Italian [...]

Mosquitoes are spreading Zika virus in Miami Beach, according to sources familiar with discussions held by the Florida Department of Health on Thursday to alert local officials. The health department’s daily report said only that there were two new local infections in Miami-Dade acquired through mosquitoes — both outside of the Wynwood neighborhood identified as [...] 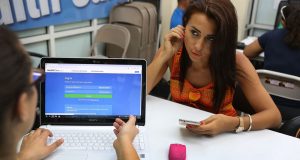 MIAMI BEACH, Fla.—Health officials are investigating a cluster of possible Zika cases in Miami Beach, suggesting that transmission of the virus by mosquitoes is more widespread in one of the nation’s more populous counties than originally thought, and that efforts to contain it are falling short. At least one other area of Miami-Dade County is [...] North Miami police have identified the officer who shot an unarmed mental-health worker as a 30-year-old member of the department’s SWAT team. Jonathan Aledda has been with the North Miami police for four years. Aledda was placed on administrative leave with pay as an investigation surrounding the shooting of behavior therapist Charles Kinsey continues. Aledda [...]