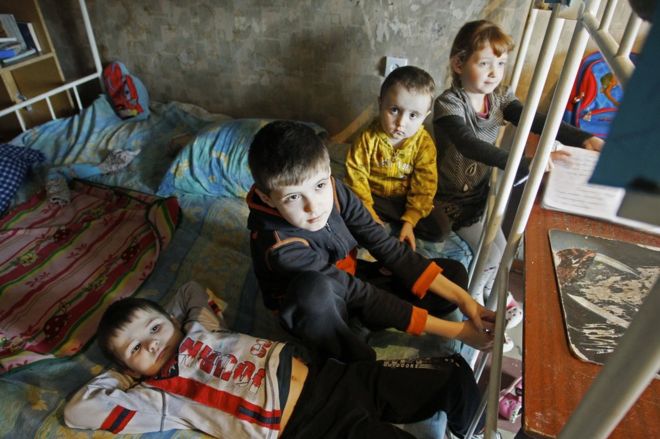 President Vladimir Putin has announced that Russia is temporarily recognising passports and other identity documents issued by the self-proclaimed rebel republics in eastern Ukraine.

Clashes between pro-Russian rebels and the Ukrainian army flared up again in recent weeks, leaving many dead.

But Russia’s foreign minister said it was a humanitarian decision.

Sergei Lavrov also announced that heavy military hardware would be withdrawn from the region, and said a ceasefire would come into force on Monday.

He is currently in Munich for a Nato conference. US Vice-President Mike Pence, also in Munich, said the US would “continue to hold Russia accountable” and would demand that Russia honour the 2015 ceasefire deal signed in Minsk, one of the provisions of which is the removal of heavy weapons.

“Identity papers, school or professional diplomas, birth and death certificates… issued by the competent bodies in the zones mentioned are recognised as valid by Russia,” it reads.

Tens of thousands of people from eastern Ukraine have sought refuge in Russia since the fighting began.

Government officials in Ukraine reacted angrily to Russia’s decision on passports, with one calling it a “deliberate escalation”.

And the former acting President, Oleksandr Turchynov, now the head of Ukraine’s national security and defence council, echoed this, saying the Kremlin had “completely ruled out” a return to the ceasefire agreement.

Mr Turchynov said: “The Minsk process provides for the de-occupation of eastern Ukraine and its restitution to the legal force of the state.

“By signing this decree, Putin has legally recognised the quasi-state terrorist groups which cover Russia’s occupation of part of Donbas.”

More than 9,700 people have died since the Ukraine conflict erupted in 2014 after Russia annexed Ukraine’s southern Crimea peninsula. Pro-Russian rebels later launched an insurgency in the east.

A ceasefire was agreed in February 2015 but there have been frequent violations. The latest truce began on 23 December.

Ukrainian forces say the fresh outbreak of fighting began when rebels launched an attack on Avdiivka, a flashpoint town held by the army that borders land controlled by the separatists.

The rebels say they were attacked by Ukrainian government forces.

Public surprised by Nadiem’s appointment as education and culture minister

How Technology Is Being Used By Students To Cheat On Tests

After the wildfire: treating the mental health crisis triggered by climate change