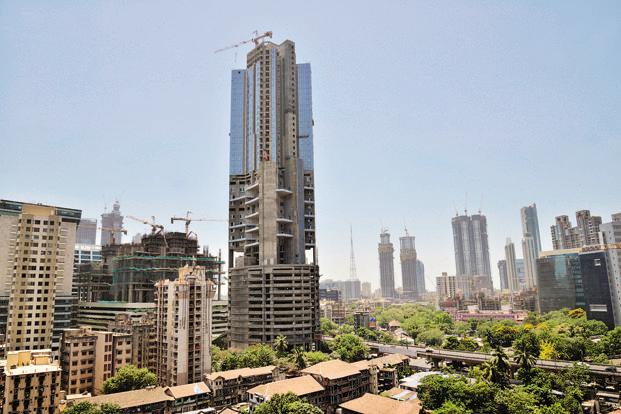 The Mumbai Metropolitan Region (MMR), a key property market, will see fewer project launches and land deals in the year ahead due to confusion over new development rules, a ban on new construction and poor preparedness for the new real estate law, builders and consultants said.

The expected decline in future launches comes on the back of a sluggish June quarter in which only 5,059 housing units were launched in MMR, less than half of the 11,041 units a year ago.

After multiple revisions and delays, the draft of a 20-year Development Plan (DP) for Greater Mumbai (the biggest chunk of MMR) was released in May. Under the new plan, developers will get more floor space index or FSI, which is the ratio of a building’s total floor area to the area of the plot. The more the FSI, the more a developer can build vertically on a given plot.

The proposed FSI increase from the current 1.33 to 2, and additional FSI promised for offices and affordable housing are good for builders, who now want to wait and see how it unfolds, before launching projects under current rules which are more restrictive.

Then there is the 29 February Bombay high court ruling, which banned all new construction in the city, as the state government and Brihanmumbai Municipal Corporation (BMC), or Municipal Corporation of Greater Mumbai, had failed to comply with the municipal waste management rules. Mumbai’s two waste dumping grounds at suburbs Deonar and Mulund are working well past their capacity.

A public interest litigation was filed by local residents asking the dumping grounds to be shifted out, and the court has directed BMC not to issue any commencement certificates or intimations of disapproval until the matter is resolved.

“A slow market, new development plan confusion and the recent court ruling have led to launches getting impacted in a big way. Developers are factoring in an extra year of approval while buying land. This is impacting the overall project internal rate of return and profitability,” said Ramesh Nair, chief operating officer (COO) at property consultant JLL India.

If matters are not resolved, plans to launch projects during the busy festive season may also get impacted, he added.

On 8 August, the Mumbai Metropolitan Region Development Authority (MMRDA) cancelled the auction of a 12,500 sq. metre plot with permission to build 50,000 sq. ft at the commercial hub of Bandra-Kurla Complex (BKC) after bidders brought up the ban on new construction. Bidding will be invited only after the issue is resolved, MMRDA said in a statement.

Developers who are struggling to make their ongoing projects compliant with the new Real Estate (Regulatory and Development) Act too have deferred new launches.

Under the new rules, builders must provide full disclosure of their projects—including all regulatory approvals, time for completion and project master plan—before launch. The builder must open a bank account exclusively for the project and deposit 70% of the home sale proceeds into it.

A state-level real estate regulatory authority and an appellate tribunal will be established to regulate all financial transactions and address consumer grievances.

According to Dharmesh Jain, president of Maharashtra Chamber of Housing Industry-Confederation of Real Estate Developers’ Associations of India, the new DP has brought builders back to the drawing board. “Launches would be subdued for another nine months to one year. Another big reason why inventories won’t come in is because of the high court ruling. Not getting approvals to start new projects in a large city like Mumbai is a big issue,” Jain said. His organization recently filed a special leave petition before the Supreme Court challenging the high court order.

The Wadhwa Group has deferred the launch of the second phase of its housing project Atmosphere in Mulund in November till the next fiscal, as it seeks more clarity on the new DP, besides making sure that the project is compliant with the new real estate regulations.

Navin Makhija, managing director of Wadhwa Group, said projects and land deals are stuck because of the confusion over FSI. “So, supply of land has reduced and also, with the real estate regulatory body coming in, people want to be doubly sure of what they are launching,” he said.

“The Bombay high court ruling is one of a couple of issues which is affecting the sector. The new DP is certainly creating some level of short-term delay,” Godrej said, adding that though the company has no project that is stuck on account of the court ruling, it will eventually feel the impact if the ban continues.

Three projects of Poddar Developers at Kalyan on the outskirts of Mumbai were delayed following another Bombay high court order banning new construction until waste management issues were resolved by the Kalyan-Dombivali Municipal Corporation. Although the ban has since been provisionally lifted, Rohit Poddar, managing director of the company, said these launches which were expected at the end of this year will now happen next April.

“With repeated change in development control (DCR) rules, people don’t know what FSI to work with. One of our redevelopment projects at Khar (a suburb in Mumbai) has been delayed for two reasons. First, because of confusion with the new DCR and now, the high court order,” said Vijay Mirchandani, managing director, Mirchandani Group.

While limited new supply has helped reduce unsold inventories in the last six months, prolonged delays in sanctioning new projects within the city may result in either developers’ funds getting stuck or create a situation of shortage in new housing supply. It may also increase the overall cost of projects in the long term.

However, since demand is yet to pick up and most builders are focused on clearing stocks, prices may not go up in the short term.