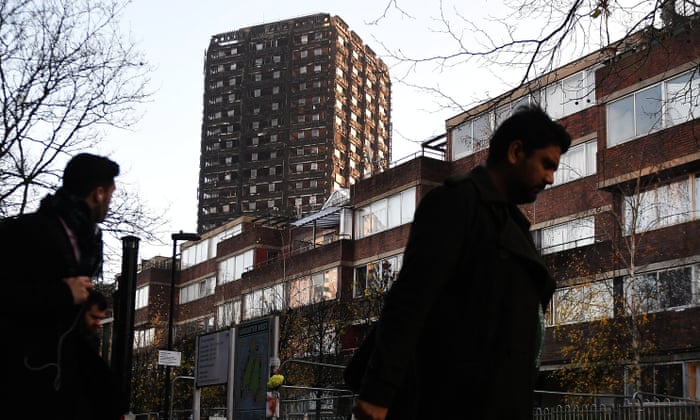 Survivors of the Grenfell Tower disaster are facing a new wave of post-traumatic stress with their chances of treatment hampered because so many victims remain homeless, experts and victims’ representatives have warned.

Six months after the west London tower block burned down, NHS staff and representatives of the bereaved said that because only 45 of the 210 households made homeless have been permanently resettled, victims cannot begin proper psychological treatment to address symptoms. These include often horrific memories and flashbacks from the fire, which killed 71 people, including 18 children.

The experts were speaking to the Guardian as part of a wide-ranging assessment of responses to the fire which also covers the future of the tower, the public inquiry and nationwide fire safety.

CNWL officials said they had already had contact with 4,000 people, but there was concern that many, particularly men, were failing to seek help and could be in danger over Christmas. A drop-in facility was set up because people were coming forward with suicidal feelings at night. Extra staff have also been primed for the festive period. So far 426 adults and 110 children are in treatment for PTSD and other trauma-related issues, according to health chiefs.

“Six months on, I am starting to see the trauma emerge with the bereaved,” said Ahmed Elgwahry, whose wife and mother were killed in the fire, and who is now involved with the Grenfell United survivors’ group. “There are a few that are young men who have lost their wife and their children and I have started to see them breaking down. I mean really breaking down.”

He added: “I am not sure they are getting the monitoring they need. I know the ones I am referring to in particular are not getting it from the council.” He said too many people had not received consistent support, with key workers changing, in some cases several times since the blaze.

Natasha Elcock, who escaped with her boyfriend and six-year-old daughter, said: “I don’t know what the lasting impact will be on her. Six months on, the trauma is starting. I know that and I can only imagine what the bereaved families are going through.”

Fears of a growing mental health crisis come as victims, community activists and politicians including Theresa May and Jeremy Corbyn prepare to attend a memorial service at St Paul’s Cathedralon Thursday. It will also be attended by Prince Charles, Camilla, Duchess of Cornwall, Prince Harry and Prince William, with music from the Ebony Steelband, the Portobello Road Salvation Army band, the oud player Rihab Azar and an Islamic girls’ choir. Mental health workers will be on hand to help survivors who struggle during the service.

“The people in Grenfell Tower were forgotten about and ignored before the fire and this is a chance for people across the country to unite and stand with us,” said Jacqui Haynes, the chair of the Lancaster West residents’ association, which includes Grenfell Tower.

Jim O’Donnell, the deputy borough director of mental health at CNWL, said significant numbers of people were not ready for help. People are “showing signs of PTSD but aren’t psychologically ready to engage in services for treatment”, he said.

“Many are just trying to cope with their daily lives living in a hotel six months after the event. If someone has a proper home they are able to get their lives back on track more easily than living in a hotel. People living in hotels can’t eat properly, they can’t cook or store fresh food and are eating takeaways. It just adds to the complexity of what they are struggling with.”

O’Donnell said there was repeatedly a stigma around mental health, so they tried to call it “wellbeing” and “emotional support”.

“There are hesitations about accessing the NHS around immigration status and what it means if [people] come forward,” he said. “We are also aware of men from certain backgrounds are very strong as men, but perhaps inside they are very brittle. We would love to encourage more men to come forward.”

One psychologist working with survivors said the lack of permanent rehousing was a major obstacle to treatment.

“Therapy focusing on trauma is often not helpful if a person is still experiencing instability or a current sense of threat,” they said. “Basic needs not being met, such as housing, is problematic and contributes to general stress, feelings of injustice and uncertainty. In some cases this can be retraumatising.”

The Kensington MP, Emma Dent Coad, has calculated that more than 200 children from Grenfell and the other evacuated homes are likely to be in hotels over Christmas.

“It is indefensible that after six months the council has still not rehoused these desperate and traumatised families,” she said. “It is heartless, immoral and illegal.”

The leader of Kensington and Chelsea council, Elizabeth Campbell, has defended its rehousing programme, saying: “We are doing everything we can to rehouse families, leading the biggest house-purchasing programme by any local authority in recent history, and committing £235m to help secure 300 new properties so that people have maximum choice before Christmas.”

LThe Labour leader, Jeremy Corbyn, has described the rehousing situation as “a disgrace”.