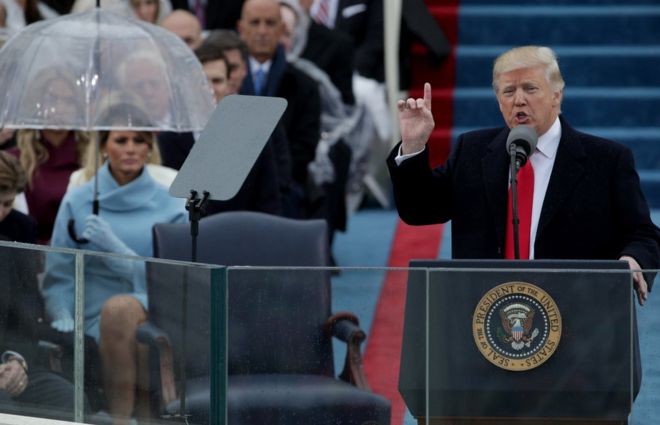 Donald Trump is guaranteed to make history as the 45th president of the United States.

And whether you love or loathe him, it’s a fact that the Republican will set a range of records as soon as he occupies the Oval Office.

From his age to his bank balance, via his notable lack of pets – here are just some of “The Donald’s” historic “firsts”.

Donald Trump celebrated his 70th birthday on 14 June, which makes him the oldest man in US history to assume the presidency. The previous record-holder, Ronald Reagan, was 69 when he took office in 1981.

Perhaps keen to allay fears about his senior status, the business mogul had his doctor prepare a gushing letter pledging that he would be “the healthiest individual ever elected to the presidency”.

The average age of all 44 previous incoming presidents is a sprightly 55.

The youngest ever incumbent – Theodore Roosevelt – got the job aged 42 years and 322 days, after President William McKinley’s assassination in 1901.

Mr Trump is the first billionaire president. Exact estimates of his personal wealth vary, with Forbes putting it at $3.7bn (£3bn) and the man himself claiming in a statement that it’s “in excess of TEN BILLION DOLLARS”.

Many of America’s past presidents have also been extremely wealthy, of course. Recent estimates say George Washington’s estate would be worth half a billion in today’s dollars.

Before his 1963 assassination, JFK reportedly lived off a $10m trust fund thanks to the vast wealth of his father – investor and alleged bootlegger Joseph P Kennedy, Sr.

Mr Trump will be following in the footsteps of former California Governor Arnold Schwarzenegger by taking just a symbolic dollar as a salary.

When Mr Trump began unveiling his cabinet picks, the number with fat wallets quickly drew the scorn of Democrats.

“Donald Trump’s administration: of, by and for the millionaires and billionaires,” tweeted Vermont Senator and Democrat presidential contender Bernie Sanders.

For better or worse, this will be the wealthiest administration in modern American history.

According to the Washington Post, commerce secretary nominee Wilbur Ross is worth around $2.5bn on his own – roughly 10 times what George W Bush’s first cabinet were worth in 2001, when the media branded them an assembly of millionaires.

Treasury appointee Steven Mnuchin quite literally bought a bank after 17 years at Goldman Sachs, and reports put his wealth at over $40m.

It has been estimated that the cabinet could be good for an eye-watering $35bn, all told. As Quartz pointed out, this is more than the annual gross domestic product of Bolivia.

Mr Trump’s triumph is also significant because, until now, no-one has been elected president in more than 60 years without experience as a state governor or in Congress.

The last president with no political experience, Dwight Eisenhower, was Supreme Commander of Allied Forces in World War Two, before he was elected to office in 1953.

Before that, Herbert Hoover, who was president from 1929 to 1933, was previously an engineer and humanitarian.

But as Mr Trump tells it, his lack of links to the Washington establishment is an asset not a flaw – and more than made up for by his experience as a deal-maker.

Some claim the appointment makes the 36-year-old the most powerful presidential son-in-law in US history.

He isn’t the first to fit that profile, however.

That said, their case pre-dates America’s 1967 anti-nepotism statute, and Mr McAdoo was already a cabinet secretary when he wed.

Ivanka Trump, Mr Trump’s elder daughter and wife of Mr Kushner, is also being spoken of as the most influential “First Daughter” ever.

So much fuss has been made of what Donald Trump owns that you might have missed one glaring absence – a pet.

It looks likely that he’ll be the first US President in over a century not to have an animal pal in the White House, after plans to have him adopt a goldendoodle dog reportedly fell through.

According to the Presidential Pet Museum, almost every commander-in-chief has had a pet, and some had a virtual menagerie.

John F Kennedy stands out for owning a veritable Noah’s Ark – everything from a rabbit named Zsa Zsa to a canary called Robin – but the crown belongs to Calvin and Grace Coolidge (White House occupants from 1923-1929), who the museum says “quite literally had a zoo”.

Their animal companions included at least a dozen dogs, a donkey named Ebenezer, and various creatures presented as gifts by foreign dignitaries – among them lion cubs, a wallaby, a pygmy hippo named Billy, and a black bear.

Donald Trump won the presidency on a pro-job platform, and has blamed free-trade policies for the collapse of the US manufacturing industry.

This is a rare stance for a US president, probably last seen in his fellow Republican Herbert Hoover in the 1930s.

In September 2015, Mr Trump told the Economist China is “killing us”, and that millions of Americans are “tired of being ripped off”.

He said that as president, he would consider a 12% import tax to make the Chinese “stop playing games”.

During his election campaign, Mr Trump also threatened to rip up Nafta, the free trade agreement between Canada, the US and Mexico, which has been in place for 23 years.

He also vowed that the US would quit the Trans-Pacific Partnership trade deal, a 12-nation agreement, on his first day in the White House.

Former model Melania Trump is as trailblazing as her husband.

She will be the first presidential spouse from Slovenia, and the first non-native English speaker.

She is only the second FLOTUS born outside the US, though – the first being Louisa Adams, wife of the sixth US President, John Quincy Adams (1825-1829), who was born in London.

As Mr Trump has been married twice before, Melania will also be the first third wife to reside in the White House. The only other US president to have divorced was Ronald Reagan, who split from his first wife, actress Jane Wyman, long before leading the nation.

Melania speaks Slovenian, English, French, German, and Serbian, and may be the most competent linguist to hold the role of FLOTUS.

She is the first president’s wife to have posed nude, for GQ magazine in 2000 among others.

Fear not, Modi tells businesspersons: Business offence to be no longer a crime; will amend law