Czechs and Hungarians call for EU army amid security worries

Saheli August 26, 2016 News Comments Off on Czechs and Hungarians call for EU army amid security worries 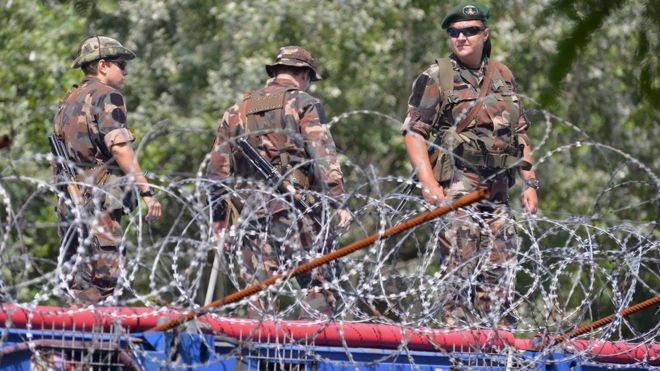 The leaders of the Czech Republic and Hungary say a “joint European army” is needed to bolster security in the EU.

They were speaking ahead of talks in Warsaw with German Chancellor Angela Merkel. They dislike her welcome for Muslim migrants from outside the EU.

Hungary’s Prime Minister Viktor Orban said “we must give priority to security, so let’s start setting up a joint European army”.

The UK government has strongly opposed any such moves outside Nato’s scope.

The Czech, Hungarian, Polish and Slovak leaders are coordinating their foreign policy as the “Visegrad Group”.

Czech Prime Minister Bohuslav Sobotka said building a joint European army would not be easy, but he called for discussion to start on it.

The EU has joint defence capabilities in the form of 1,500-strong battle groups, but they have not been tested in combat yet.

Last year European Commission President Jean-Claude Juncker called for a European army to give the EU muscle in confronting threats from Russia or elsewhere.

Slovakia will host an informal EU summit on 16 September to consider the EU’s future without the UK.

No UK minister will attend, as the Conservative government is preparing the ground for Brexit, in line with the 23 June vote to leave the 28-nation bloc.

“Brexit is not just an event like any other – it’s a turning-point in the EU’s history, so we have to frame a careful response,” Mrs Merkel said.

Hungary and Slovakia are suing the European Commission at the European Court of Justice (ECJ), calling its quota scheme for distributing refugees illegal.

Hungary will hold a referendum on 2 October aimed at showing majority opposition to quotas.

Mr Orban announced plans on Friday to build a second razor-wire fence, taller and stronger than the first, along Hungary’s southern border with Serbia.

The second fence would be to keep out any future wave of migrants arriving from the Balkans.

The BBC’s Nick Thorpe in Budapest says Hungary currently allows around 30 people a day through two transit zones built into the existing fence. Migrants live in wretched conditions beside the fence, waiting to be allowed through, he reports.

Others pay people smugglers, who bribe police on both the Serbian and Hungarian side.